Last weeks poor performance was still fresh in the minds of the first team squad, after a fantastic training session midweek there was a real determination to correct the mistakes made against Didsbury Villa. 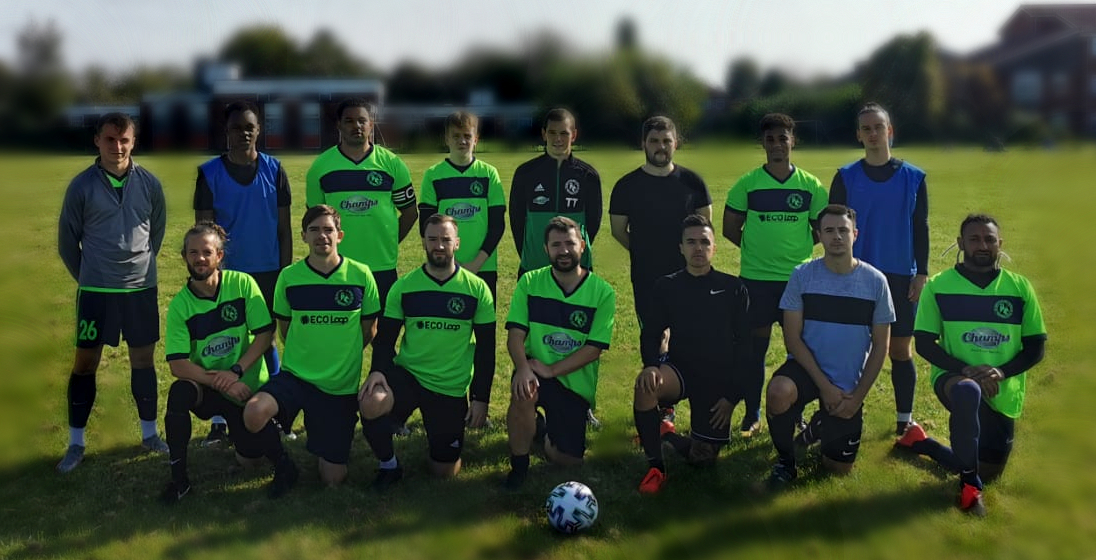 Kick-off was delayed by running repairs to the nets, during this time Irlam noted the goalkeepers starting position was well off his line on the edge of his box. Encouraged by Partington and Sharples, the kick -off was taken and Irlam shot from just inside the Davyhulme half. The ball flew over the keepers head, stuck in no mans land, which is surely Davyhulmes quickest ever goal at around 3 seconds.

After the flying start, a spell of 20 minutes of total dominance and possession followed for Davyhulme. The only thing missing was a final product, as they rushed the final pass and snatched at chances so failed to extend their lead.

Half way through the first half, Partington found the net to double the lead. Collecting the ball at the halfway line, he drove forward at the Swinton defence before smashing his shot into the bottom corner from 25 yards out and gave the keeper no chance.

Davyhulme’s dominance continued through until half time, with the pattern of possession and lack of final product returning. The only moment of note came when Hanlan drove into the Swinton box, before being brought down but the referee waved the Davyhulme pleas away.

The second half started the way that the first half finished, with Davyhulme dominating possession although there was much more of a threat about the play.

Omole entered the fray with 60 minutes played, replacing Sharples, to devastating effect. He picked up the ball on the wing, dropped a shoulder to beat his defender and slotted the ball home passed the oncoming goalkeeper.

His first full season at open age, and Omole showed his lack of experience as he went from hero to zero shortly after his clinical finish. Ryan Burke beat the offside trap, and found himself in space on the right wing before he selflessly squared the ball for Omole to tap home at the back post from inside the six yard box. He could see the headlines and had his celebration planned but instead he relaxed, leaned back and rattled the crossbar. It seemed easier to score.

Ryan Burke turned provider again, as he squared up his full back before gliding passed him to be then be taken down in the box. Irlam stepped up and calmly placed the ball in the bottom right corner, beating the goalkeeper despite guessing the right direction.

Davyhulme’s fifth came via a set piece, Partington on corner taking duty whipped a ball in that was partially cleared to Dennis on the edge of the box. Dennis controlled the ball and slid it left to substitute Ritchie, showing great composure as he touched the ball away from the defender and cooly slotted home.

The team’s commitment to playing football in the modern way and build from the back came back to bite them, as goalkeeper Taylor took a goal kick short to Bennett who in turn looked to play into midfield. The advancing Swinton player pressed forward and deflected the ball back onto the arm of Bennett. The new confusing handball law saw the referee award a penalty, the Swinton Poets forward stepped up and scored with what turned out to be their only attempt on target.

Despite the score being 5-1, there was still time for another highlight. Omole and Leigh Burke combined well down the left wing with a number of passes back and forth before Burke was through into the box surrounded by Swinton defenders. Burke then turned into Leighnel Messi bringing the ball under his spell with mesmerizing close control to go around three or four defenders, one at a time before being brought down for a penalty and being denied the possibility of a fantastic goal. Burke stepped up himself to take the spot kick, and got away with a loose finish as the goalkeeper guessed the right way and should have kept it out but instead pushed it into the side netting.

It was a good game, played at a much better tempo and intensity than the limp display last weekend. This display was a much better reflection of the squads ability and pre-season form, although the abandoned game in early September could be to blame for the lack of momentum.

Leigh Burke was named The Sea Moss Elixir Man of the Match due to his hardwork, pinpoint passing & mesmerizing feet throughout.

The win means Davyhulme Park move up to seventh in the table, and with a tightly contested season expected they can’t afford to drop points cheaply as they did last week. Sale United appear to be the team to beat based upon early form, taking maximum points from their first three games and are expected to extend this streak to four as they face bottom of the table Deans Ladies & Youth this weekend.

HOW WE LINED UP

Davyhulme Park travel to Hough End on Sunday 27th September (11:00am kick-off) to take on an inform Greater Manchester side. They’ve started the season well, and are one of two teams to have taken maximum points so far this season. These are the crucial games that will make the difference come the end of the season.